the daemon as an island! 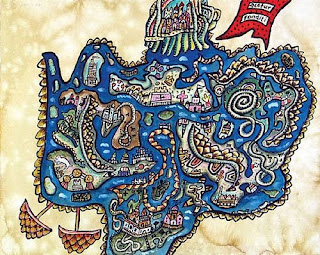 From The Odyssey to The Beach, islands have been one of the most powerful and magical inspirations to writers... Islands work as social laboratories, says John Harding.
"an extraordinary amount of fiction has taken place on islands, for reasons that are both psychological and practical. In Jungian dream analysis, the sea represents the unconscious mind, and it has been suggested that the island symbolises the ego or the conscious self. Indeed, some psychotherapists ask patients to draw their own island, with the result examined as a self-portrait. It's impossible to be beside the sea and not feel the tug of elemental forces, the kind of forces that gave rise to the earliest stories." going through the Odyssey, Shakespeare, Robert Louis Stevenson, Daniel Defoe's Robinson Crusoe and others the writers claims that every novel seeks to create its own world and entice the reader into it. "On a fictional island, the writer has complete control, and if one of the main motivations of art is to make order from chaos and so make sense of the world, the opportunity is here in spades....Islands are places to escape to, not only for writers freeing up their imaginations but also for their characters and readers.....perhaps most interesting today as an early example of sci-fi, an island genre that had some currency in the 19th century, before writers discovered outer space . ". " The idea of the island as self. That's another thing about islands. Take a trip on one, and keep going long enough, and you will always end up back where you began.......
(taken frm artcritical.com - Island painting by ALAN DAVIE)
Posted by Rosh at 10:36

Thank you, Roshni. I do think the daemon could be viewed as being "island -like in the Jungian sense. Viewing it as I do within philosophy's framework, I have often seen it as Nietzsche viewed his "unknown god"; as being "from high mountains". What Peake has termed "daemon" also Kierkegaard viewed as another self, issuing from the inward mind, which he compared to a lone pine tree. I think this is what is so very poignant about Tony's CTF: He would appear to have discovered an empirical basis for all of these intuitions on the part of so many thinkers. I for one have been very moved and intrigued by this ability to name and describe this entity empirically on Tony's part. The "second self" described by William James I see as a precursor to Tony's theory. It is my aim to make people see that his theory reaches back to all of these ideas, and I think something could be published by him - essay or full text - which would be very convincing. Also including all of Le Marcs' additions, which pan it forward and backward beautifully. If time would only allow this focus !