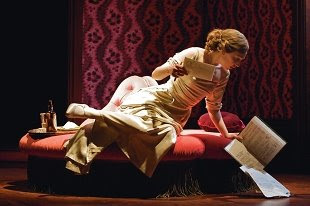 I am delighted to say that my interview with Amanda Lyon and Katrine Seidelin has now been posted on The National Theatre website. It is an excellent short film that explains in a very effective way why this particular production is of great relevance to my own theories on the nature of time, consciousness and perception.The link can be found at:

I would like to thank both Amanda and Katrine for an excellent short film.
The picture above shows the central character "Kay Conway" as she slips into some form of seizure, a seizure that places her 19 years in the future. It is interesting to note that in my theory I suggest that seizures (specifically temporal lobe epilepsy petit mal "absences") do open up the human mind to strange temporal anomalies such as the one depicted in this fascinating play.
Indeed the actress who plays Kay Conway, Hattie Morahan, will be on stage with me on the 23rd July together with particle physicist Professor Jeff Forshaw.
Posted by Anthony Peake at 13:15