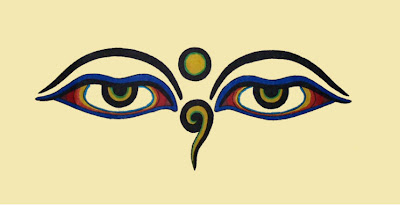 I read books in the order I buy them and I’m way behind. I finally got to the stage in my elaborate queuing system were I’m reading the Daemon. I’ve been looking forward to it and have some comments to make on the chapter on different religious views that seem to support ITLADian thinking and also the chapter on the possibility of communication from the higher self during dreaming for those people outside of the three main groups within the scale of transcendence.

Firstly, I loved the common ground identified in various diverse systems of belief but I suggest that the Buddha may also have been able to shed ample and relevant light. For instance the very first line of the core Buddhist scripture the Dharmapada (Sayings of the Buddha) is,

“With our minds we create the world; all that we are arises from our thoughts.”


This could be phrased differently as “The act of perception by a conscious being brings matter into physical existence” (ITLAD p23). Buddhists believe the Buddha recognised the illusory and dream like nature of the ordinary world and so understood how to end suffering.

Within Tibetan Buddhism, like some of the systems covered in The Daemon, there is often an understanding that the mind functions (as a formless continuum) with three levels. The first is the Gross Mind, which is the ordinary every day mind which perceives the physical “reality” of the world. It is generally deluded and shrouded in ignorance of this illusory nature of experience. It is subject to habitual desires and cravings and wanders dream like through suffering and unsatisfactory experiences. This mind may be seen as an equivalent to the eidolon on account of it’s limited viewpoint of the universe. The second part of this triune entity is the Subtle Mind which is the mind that arises during dreaming. Its reality is more fluid and flexible but it still believes it to be real, on the whole, when experiencing it. The third part is the Very Subtle Mind which manifests at the loss of consciousness at sleep and again at death as clear light. It is this, Buddhists believe, which, although it is not permanent or unchanging, carries experience from one life to the next. This is the most powerful and distilled element of the mind which eventually is the seed of individual enlightenment/Buddhahood. It seems that here is another clear reflection of the split nature of the mind from this totally different culture.

Within contemporary western Buddhist thought it may be not unreasonable to recognise the various deities, sometimes depicted, as Jungian archetypes within the mind, beings of light, which represent personal potentials rather than external powers. For instance the potential for perfect compassion may appear in deep meditation as Chenrezig to anyone familiar such an iconic image.

The Buddhist practice of chanted “Sadhana” visualisation represents an attempted technology not just to worship Buddhas and Bodhisattvas but to actually become them. There are also stunning and intense accounts of Tibetan NDE experiences (called Delog experiences) in which the various deities appear in exactly the way Christian NDEs may reflect meetings with Christ or Angels. If these are ways to recognise the Daemon then perhaps some of the meditation techniques associated with these traditions may provide useful tools to explore ITLAD too.
One in particular leaps out at me, the esoteric Tibetan way of Dream Yoga. This is a fascinating idea based in ancient tantra where the basic idea is to meditate to the point of retaining conscious while in the dream state, (often going to sleep sitting upright in the full lotus posture!) The meditator then enters a perfect lucid dream state with a clear goal. The idea is to make a series of ritual offerings and requests before sleep to the Buddha in question and to request Him or Her to appear in the dream to convey direct blessings and give teachings on spiritual advancement. What seems to be in question here is a direct communication between the lower and upper levels of consciousness which is not just one way.
When I first started to meditate in 1995 I experienced a series of very strong lucid dreams where I felt I had been spoken to and even asked questions of several different Buddhas. (Interestingly when I heard the voice of the Buddha it seemed to come from above my right ear each time) These were serious life-changing experiences which caught me completely off guard. In an attempt to recapture this I read the work of psychologist Stephen La Berge and Lama Surya Das about the science of lucid dreaming and the practice of Dream Yoga. I practiced all through the last summer but only made slight progress. I also investigated the idea of lucid dream machines such as the Nova Dreamer, which detect when the brain enters REM sleep and send a stimulus signal to encourage the development of lucid dreaming capacity. I am aiming to acquire one before Christmas and continue experimenting. I wonder, has anyone else has tried lucid dreaming to make the one way channel of communication into a two way conversation?

The eventual goal of Dream Yoga is to recognise on a deep level that dreaming is a mistaken appearance to the Subtle Mind and that external “reality” is a mistaken appearance to the Gross Mind.
When the historical Buddha was questioned about his extraordinary presence and abilities, they asked “Are you a man or a god?”- He replied simply, “I am awake…” Of course Buddha was a title given to him and not his name (which was Sidharta Gotama Shakyamuni). The title simply meant one who has awakened from the dream of ordinary experience.
Posted by dorje at 22:31

You may wish to place this post of yours on the FORUM as that is the place for pieces such as this.

It would make a very useful addition to the Esoteric Philosophy section and discussions which have been taking place over there.

Cheers- Luddite as I am I'll give it a go!