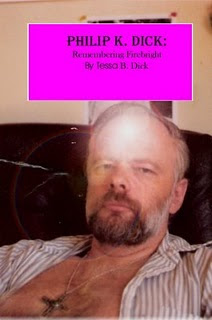 Last night as part of the ongoing “Schrödinger’s Diary Archive” (see box to the right) myself and Miguel Conner recorded probably the most interesting interview that I have been involved in since writing ITLAD and embarking upon this “Garden of the Forking Paths” that describes my writing career.

I consider this the most important because it was the first one in which I was doing more than simply explaining the complexities of ITLAD/CTF to an audience (and, on occasions, interviewer) who has no pre-knowledge of what I am talking about. This one was different. It gave me the opportunity to glean new information regarding a crucial component of the whole hypothesis, the theophany of Philip K Dick.

Usually the episodes of “Schrödinger’s Diary” last about forty minutes. Last night’s recording went on for over an hour. And this was because none of those involved wished it to stop, that is Miguel, myself, and our special guest, Tessa Dick.

This interview was both delightful and fun! We spent a good deal laughing and going off on weird “Pythonesque” avenues of thought which certainly amused us anyway! But the underlying theme was both fascinating and, in my opinion, a possible turning point in the path that ITLAD/CTF will now take. (Hmmmm, why I am a so preoccupied with track analogies today; paths, avenues etc etc?) This is because for the first time I was not explaining my ideas but asking questions of somebody who was an actual witness to the events I describe in my second book, The Daemon. And what answers!!! I will in no way ruin this interview for those who wish to listen to it but if you ever had doubts about my itladian interpretation on the experiences of Tessa’s late husband, the great Philip K Dick, then these doubts will probably be removed. Tessa describes the events from the most important position possible, she was there!

Indeed Tessa also reinforces my analysis of events that took place earlier in Phil’s life when his Daemon manifested itself as both a guide and a form of mentor from his own future. This is astounding stuff.

A few years ago I asked author Brad Steiger what he thought Phil would have made of my “Cheating the Ferryman” hypothesis. Brad, who had known Phil for many years, stated that he would have been fascinated and intrigued. If anything can be taken from last night’s interview it is this, PKD would not only be fascinated, he would have understood because he personally experienced the immanence of his own “Higher Self”, his Daemon.

As a final point Tessa, in her opening comments regarding the moral negativity of the Eternal Recurrence, proved to me that readers must read both books to fully appreciate why it is that ITLAD/CTF is neither an updating of the Nietzscheian / Ouspenskian “Eternal Return” nor a re-presentation of Berkeleyan Idealism. I agree that there are certain similarities but my hypothesis is far more subtle and life-enhancing (and, in my opinion, based on empirical science rather than philosophical conjecture). Tessa, quite rightly as she has only read “The Daemon”, assumed that ILAD/CTF suggests that we all live the same life over and over again in an endless repetition of our mistakes and successes and that the lives of others that we perceive in our Phaneron is the only life that these people will lead. She cited the example of a still-born child and how morally distasteful the idea is that that child will repeat that short “life” over and over again. By applying the implications of Everett’s Many Worlds Interpretation (or the Many Minds Interpretation) such a sad situation is a “reality” only in this universe, the universe in which you are the observer (c.f. Copenhagen Interpretation …. And yes, I am aware that MWI is supposed to be an alternative to Copenhagen) but within the Macroverse there will be trillions of universes where the child was not stillborn and experienced all possible alternative lives resulting from each and every decision. But the subtlety doesn’t stop there. If we apply the implications of David Bohm’s “Implicate Order”, “Holomovement” and “Enfoldment” then we exist in a universe in which life itself is enfolded within itself (and yes, I am also aware that Bohm’s interpretation was suggested as a counter to both Everett’s MWI and Bohr’s CI). Tessa will find, by a careful reading of my first book, that things are not quite so depressing. We live a “Groundhog Life” rather than “The Life of Ivan Osokin”!

This amazing discussion will be available for listening (and downloading) in a few days time. If you have the time do give it a listen ……. oh, and do check out Tessa's book "Remembering Firebright"
Posted by Anthony Peake at 09:24