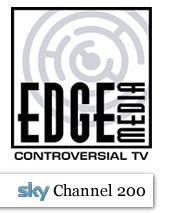 I am delighted to announce that I will be appearing live on UK television on the Thursday 23rd July at 2000 (British Summer Time). I have been invited to be the sole guest on a two hour programme on Edge Media TV.

I will be appearing on their "Flagship" programme On The Edge. I will be interviewed by Theo Chalmers. I spent a fascinating 45 minutes chatting with Leo yesterday. He has a great sense of humour and I am sure that this could be a very interesting show. indeed I am informed that there will be a facility whereby listeners can "text in". How this facility works I am not sure but I watched part of Theo's programme last night and the listener involvement was very active.

However what is even better news for those of you outside of the UK (and those of you, me included, who do not have SKY TV) is that this programme will also be available for viewing live via a webcast. This can be viewed at:

Their general website can be found at http://www.edgemediatv.com/ .
Posted by Anthony Peake at 16:24

Wow, and congratulations to you, Tony. I hope to be able to download this and embed this. Praise unto you, Anthony.

Ach, so ziss is why I've been dragged back to ziss site!