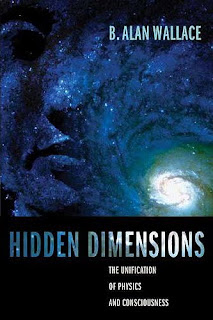 Whilst on holiday in Greece recently I read a fascinating book entitled Hidden Dimensions - The Unification of Physics and Consciousness written by Dr. B. Alan Wallace. I find this an absolutely fascinating book that is well worth checking out.However what really caught my eye in this book was a reference to the work of Michael Mensky. Philosopher Mensky has extended Everett's "Many World's Interpretation" (MWI) and in doing so, in my opinion, suggests a wonderfully itladian slant that gives yet another solution to the implied solipsism of ITLAD/CTF.
You will recall that according to Everett at any act of observation the wave function is not collapsed by that observation but the wave function continues with the the act of measurement (observation) dividing the quantum world into alternative classical worlds, all equally "real". The observer subjectively perceives only one classical world, namely that of everyday experience.
However all the other worlds also exist.
Now the issue here is that each alternate world must, by logic. also contain an "observer", many replicas of the person who existed prior to the act of observation.... and each one of these replicas believes that they are the continuity of subjective consciousness.Mensky asks the simple question: What happens to the observer's consciousness when such a measurement takes place? He states that every observer sees only one result ... meaning that a choice of one alternative reality out of all the possibilities must be made. Mensky suggests the following itladian solution:
"All alternatives are realised, and the observer's consciousness splits between these alternatives. At the same time, the individual consciousness of the observer subjectively perceives what is going on in such a way as if there exists only one alternative, the one she exists in. In other words, the consciousness as a whole splits between the alternatives but the individual consciousness subjectively chooses (selects) one alternative".
By this he is suggesting that the the observer's brain and the observed system are synchronistically entangled. Now what is exciting is how Dr. Wallace interprets Mensky’s idea. He writes:‘Unlike inanimate matter, every conscious living being perceives the quantum world, with its characteristic nonlocality, relative to its own cognitive frame of reference. Each of these individual classical projections is “locally predictable”, and in each case one, a conscious being realises a world of living experience. And each such classical world exists only relative to such a being or community of beings.” (page 82) And in this way Wallace and Mensky explain how all “observers” within the same cognitive framework perceive the same things and in doing so ensure that their observations are consistent. Indeed he goes on to suggest that the selection of reality is made taking into account the preferences or psychological state of that observer:‘So it is possible that by choosing a classical world according to our interests, we may affect the probability of which alternative we observe.” Wallace then presents the most amazing quote from Mensky:
‘If, for instance, a close relative dies in one of these realities and remains alive in another, the conscious subject is highly motivated to select the latter alternative. If he believes in this case that he is able to affect the selection, it is not inconceivable that he will actually increase the probability to some extent that he will witness precisely the latter alternative’.
Of course within ITLAD/CTF the choice is assisted by a “precognition” or “hunch” injected into Eidolonic awareness by the Daemon who is already aware, having followed through the alternative scenarios in previous runs of the Bohmian IMAX.Wallace makes an interesting observation that this may explain such mysteries as the “placebo effect”.I would add that this may also explain the “Law of Attraction” (Ed, is this how you always find a parking space?)Now for a true (and well documented) personal example.
For the last eight years I have never had a plane seat that has not been over the wing! This has become far more than a joke with my wife, family and close friends. I have flown approximately 50 individual sectors in that period and every flight is the same …. I get a window seat and look out on the wing….with one exception, and only one. Four years ago I flew to Greece with my mother and wife-to-be to make arrangements for our forthcoming marriage on the island of Halki. I gave my mother the window seat. And guess what ….. you guessed it. We were off the wing!I have calculated that on any one flight there is a rough average of 70 window seats on an average size plane.(737-800). 16 of these will be on the wing. So I have a 1 in 4.375 of being allocated a window seat on a wing. So on average I should be off the wing 3 flights in every 4. But I have been on the wing 50 times out of 50 !Is this evidence of my negativity (I now expect to be on the wing?) that places me always in the universe where I am on the wing?Will my universe now change because I have recognised why this is happening? I am flying from London to Denver in a few weeks time. Let’s see what happens!!!
References:Wallace, B Alan – Hidden Dimensions – The Unification of Physics And Consciousness (Columbia University Press) – isbn: 9780231141505.