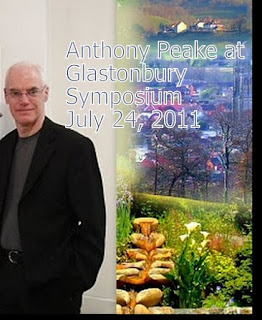 "The Glastonbury Symposium is one of England's longest-established and acclaimed 'alternative' conferences, where the audience is often as interesting as the speakers!

Held in the unique environs of the fascinating and varied town of Glastonbury in Somerset, the Symposium has grown and evolved massively since its inauguration at the Blue Note Café in 1990."
Anthony Peake is author of "Is There Life After Death?:  The Extraordinary Science of What Happens When We Die" (Chartwell Books,  2006)  and "The Daemon:  A Guide to Your Extraordinary Secret Self"  (Arcturus Publishing,  2008),  and has 2 additional books pending publication.

His "Cheating the Ferryman"  thesis,  about a second self hidden within human consciousness which contains a shocking secret for us at death,  was lauded by the Journal of Near Death Studies as "one of the most innovative and provocative"  immortality theories ever.

Peake has lectured extensively throughout Great Britain, Europe, and the United States,  and has been featured on Sweden's Red Ice Radio,  Edge Media TV in the UK,  as well as numerous other radio and television programs,  including the BBC.

For more information,  go to: