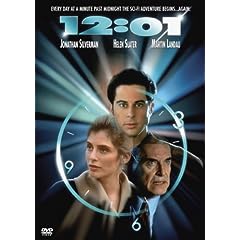 Anthony, i cannot believe throughout my plethora of film refferences i have never mentioned to you about the film 12:01. I know, you are hugely influenced and taken with the film Groundhog Day, this film has a very similar idea. If you have never seen it, i am almost certain you will get a lot out of it. Don't be put off by the words "Starring Jonathon Silverman" either!!!

Barry Thomas's employer, the Utrel Corporation, is having trouble with its top-secret particle acceleration experiment. The government has ordered the project shut down out of safety concerns, leaving founder Thadius Moxley with a major setback and his hopes of finally achieving a major scientific breakthrough dashed.

Barry, a low-level screw-up in human resources, is only dimly aware of the project and its problems until he begins reliving the same day over and over. No one else realizes that they're caught in the very thing critics had warned would result from the Utrel experiment -- a "time bounce," a phenomenon which prevents the universe from stretching forward more than 24 hours before snapping back and resetting to where it had been at 12:01 that morning. But Barry had endured a massive electrical shock at the moment the time loop initiated, knocking him out of its repetitive cycle and making him alone aware of its effects.

Making matters worse is fact that the beautiful scientist at Utrel whom Barry has adored from afar is violently murdered at the end of the first repeating day, spurring Barry to try to prevent her death every time the cycle recurs. On each repeating day he is able to become closer to Dr. Fredericks, falling in love while they try to thwart whoever is using Utrel's experimental equipment and so unwittingly causing the time bounce, trapping humanity in an infinite prison of which they're not even aware.

Thanks for reminding me about this movie. I am sure I watched it a few years ago and really enjoyed it (particularly as in my non-writing life I am a Human Resources (HR) consultant - rather liked te irony with regard to that. When working as an HR Manager one sometimes has that distinct feeling of living the same day over and over again!!).

I will try and take the opportunity to watch this movie again.

Being more of a massive bibliophile than film buff my references to ITLAD tend to come from the written word.
If anyone enjoyed Tony's book then I recommend they read the remarkable "Mobius Dick" by Andrew Crumey.
Or some of the FABULOUSLY far-fetched fiction of the now legendary Robert Rankin (top man, impressive drinker and stout basher of modern ways), especially his books with Barry The Time Travelling Sprout who lives in the brain of various people (including Elvis!)
I'm beginning to sound as surreal as HurlyBurly so I'll go for a lie down in a darkened room.
*flounces off*

Ladies and gentleman, stick around for Karl's encore...

He will be sticking his tongue out and saying "ner ner nee ner ner".

I assure you that I shall not.

Stop being clever and witty and err.....stuff and answer that email i just sent you! But save some whisky.... you know, rainy days.

Sorry HurlyBurly,
being limited to an hour a shift at the library I'm desperately trying to cram in everything which is frustratingly impossible.
If I gain either the compulsion to repair it or the finances to replace it I shall address the problem my laptop has caused in some part by my trying to get it to merge Durac and Schrodinger's equations with Matrix Mechanics and Imaginary Number.
Poor thing kind of imploded upon itself.
I now have a swirling black hole on my coffee table and several nebulae in my living room.
Such is life !!