Soren Kierkegaard and his "Secret Thorn": TLE and the daemon 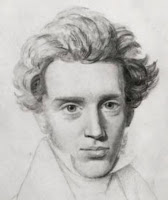 Kierkegaard's Epilepsy:  The Intriguing Secret of the Machinery ( essay by H LB Hansen)
Temporal Lobe Epilepsy and the Peakian Daemon in the Philosophizing of Soren Kierkegaard
Since first finding Anthony Peake's online essay,  Cheating the Ferryman:  A New Paradigm of Existence?  I have held the view that his concept of binary mind and its dyad of eidolon/daemon lends much support to the philosophizing of Kierkegaard.  Having been an avid reader of K,  I had begun to suspect  -  after reading Tony's sections on the link of Temporal Lobe Epilepsy to daemonic interference  -  that Kierkegaard may have been epileptic.  Now, after having researched some of Kierkegaard's assertions about his "ailment" and some works which have made allusions or reference to it,  the  reading of this Hansen essay has decided the case in my own mind.
In February 1846,  Kierkegaard made a visit to his physician,  after having suffered for some time from strange "fits",  "going rigid",  fainting spells  and"swoons" in which he was "caught up to the sublime" .  Now,  after meeting with his physician, in his journals Kierkegaard begins to speak of "the idea of marriage and an heir being closed to me:,  of a "secret wound",  a "disharmony between between mind and flesh" which makes him kin to the Apostle Paul  -  who also suffered "fits"  -  and a "thorn in the flesh"  which sets him apart from others.
In Tony's Scale of Transcendence,  and in his theorizing about TLE and those afflicted with it,  and the connection to daemonic interference,  new light is shed on some of Kierkegaard's own philosophizing and into his basic assertions.  Running through the passages of Concluding Unscientific Postscript, Fear and Trembling,  Either/Or, Christian Edifying Discourses, and the pages of his own journals,   are allusions,  and with often odd phraseology, to a mind daemonically guided and enraptured.  His insistence upon the "man proceeding from the inward mind",  of the individual's duty and pressing need to fight against organized society;  his emphasis on the "one who sees the truth alone, against the crowd",  and his odd notion of sharing "a love secret with God"  all become clearer in the light of the Peakian dyad.  How strongly the daemon shines forth in the existential and suggestive passages of all of Kierkegaard's works. That he was often in the grips of his strange "fits" which made time seem "eternal"  and his surroundings "strangely removed and colored" becomes understandable when one imagines his epilepsy granting him,  as Tony explains aptly in ITLAD,  access to that secret self which made all of religion,  politics and culture seem urgently in need of reparation to this sole thinker of inward realms.    Once again,  the accidental finding of an essay which has great meaning to me and expands my understanding of all I have read, and thought,  and will think again;  issues from and leads again into the thinking of Anthony Peake.

addendum: There is so much in Kierkegaard which would seem to be speaking precisely of Tony's dyad. Strange! As though once again Tony had reached back in time, to K. ( as well as to PK Dick, Socrates, and even Shakespeare. This train of thought gets eerie, yet it is persistent in its intrusion into my mind. Let others grapple with it, I suppose. Perhaps Tony is keeping a secret in this respect. )

"The Temporal Lobe Epilepsy Syndrome as Elucidated in the Authorship and Life of Soren Kierkegaard" is an essay out of Scandanvia ( I must look up the details once more) which claims that SK gave one of the best phenomenological analyses of epilepsy in existence has much to offer on this topic.

Oh, both essays are in fact by Hansen and Hansen team.

sm kovalinsky: I have nothing to add but i would simply like to say how much I enjoy your contributions to the forum. They have suggested many new directions to me. Thank you.

And I in turn thank you, for your very kind comment! It is much appreciated, and I am happy to hear that my writing is enjoyed. Take good care; smk