Itladians in the national press! 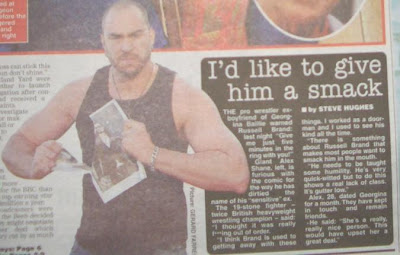 Although this is not strictly to do with matters itladian it does nevertheless involve an itladian.
Over here in the UK there has been a major scandal involving the BBC. Two presenters of BBC Radio 2, Russell Brand and Jonathan Ross, phoned up the actor who played Manual in the classic comedy series Fawlty Towers (Andrew Sachs) and on air Brand left a message on Sach's answerphone claiming that he had had sex with Sach's granddaughter, the model Georgina Bailey.
Well it seems that Georgina is the ex-girlfriend of itladian wrestler Alex Shane. The image above is taken from Thursday's Daily Star newspaper.
For those of you who cannot quite see the text it reads:
'The pro wrestler ex-boyfriend of Georgina Baillie warned Russell Brand last night "Give me just five minutes in the ring with you!"
Giant Alex Shane, left, is furious with the comic for the way he has dirtied the name of his "sensitive" ex.
The 19 stone fighter - twice British heavyweight wrestling champion - said "I thought it was really out of **** order. I think Brand is used to getting away with these things. I worked as a doorman and I used to see his kind all the time. There is something about Russell Brand that makes people want to smack him in the mouth."'

Unfortunately Alex could not really place an itladian slant on this incident. Mind you I think we would all struggle to do so.
Good on you Alex .... and the best of luck in your forthcoming fight!
(Thanks to Richard F for pointing this out to me).
Posted by Anthony Peake at 14:01

"There is something about Russell Brand that makes people want to smack him in the mouth."

And then relive their lives, over and over, and do it again, again and again ?

Oh, Tony, I love this kind of thing, and leave it to you and your Byronic self to call it up to you. That pic sure looks daemonic, I can tell you that. And we need something of you in it as well, scandal is a surefire way to fame. (I am feverishly cooking up a scandal, and thinking of an ITLADian slant to this story as well)

Hmmmm, it appears this has rather stirred up a few opinions elsewhere on the information super highway.

I shall keep one of my legendary low profiles on this one.