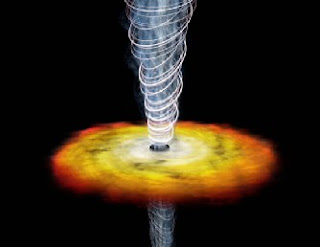 Whilst doing research for my first book I amassed a considerable amount of supporting material that never made it even into the "hard science" original version of ITLAD. I have a whole notebook full of these obscure but profoundly itladian facts. One of my favourites is the case of Makarian 501. This was discussed in an article that appeared in New Scientist in September 2000.

Apparently in March 1997 an obscure, small galaxy named Makarian 501 (named after Georgian astronomer Benjamin Markarian) showed itself to be a "Blazer". Blazers are galaxies that are thought to have a black hole at the centre. Above and below the assumed black hole are two jets of energetic photons and electrons. These particles shoot millions of light years into space. As the galaxy revolves the jets points in the direction of Earth and what is observed is an increase in brightness of radiation. In 1997 this showed itself to scientists as a gamma ray ray source of some consequence, even upstaging the famed Crab Nebula. This intrigued scientists because Makarian 501 is 50,000 times the distance of the Crab Nebula.

Now the huge mystery is how these gamma rays reached Earth. Usually when a gamma ray and an infra-red photon collide they have enough energy to mutate into an electron and a positron. This sea of of infra-red photons should stop the high-energy gamma rays. To explain this giovanni Amelino-Camelia, a physicist at the University of Rome, suggests that the Makarian gamma rays may be the subject of a whole new form of physics that rules the high energy universe. As many of you will know at scales approaching the Planck length (1.616 x 10-35 meters) our picture of smooth space and time gives way to a seething froth of quantum gravity fluctuations. This is termed "space-time foam".

It has been suggested that in these conditions, and has photon energies increase, the bumpiness of space-time, may cause the speed of light to drop off - as if the light 'feels' the bumpiness. Amelino-Camelia uses an interesting analogy - "If you role a soccer ball across a table with lots of tiny ridges it will travel at roughly the same speed it would have done if there were no ridges. But if you roll a tiny little ball, its path will be strongly altered by all the little valleys in the table."

And it is this effect that allows the gamma ray photons to aviod the infra-red photons as they leave Makarian 501 behind and start their journey to Earth. But what is fascinating is that this implies that these gamma ray photons may "lag behind 'real' time". The article, written by Hazel Muir, ends with this amazing statement:

"Quantum gravity implies that time comes in descret pieces. What is more, like Schrodinger's Cat, which is neither dead or alive until we choose to look at it, time would exist as a jumble of of different possible values".

So could it be that time is a wave function that is also collapsed by the act of observation? If this is so then time really is created by the observer ... we all exist in our own time scenario. Indeed if we apply the ORC-R theories of Penrose and Hammerhof to this idea we have something profoundly itladian ... and something that can be used to explain the subjective and glutamate facilitated time-dilation effect that is crucial to my "Cheating The Ferryman" theory of what happens to human consciousness at the point of death.
Posted by Anthony Peake at 09:06

"The article, written by Hazel Muir, ends with this amazing statement:
"Quantum gravity implies that time comes in discreet pieces. What is more, like Schrodinger's Cat, which is neither dead or alive until we choose to look at it, time would exist as a jumble of of different possible values".

A-ha! My old "Quanta of TIME]", eh! So, if indeed TIME does exists in discreet packets, then this removes the anomalies suggested by Xeno's Bisection Paradox and Thomson's Lamp (et al) as TIME is no longer a fluid infinite constant. This also means that it becomes finitely divisible and thus the "eternal" aspect of both Nietzschean and Peakeian recurrences hits a Mathematical problem. The old 1 + 1/2 + 1/4 + 1/8 + 1/16 + 1/32 to 1/N (where N=infinity) will never equal 2 problem thus becomes solvable as a conceptual process for it is not "2" that we are aiming for, but "2 minus the Quanta of Time", so as the figure reaches 1.99999..... it enfolds upon the Quanta of Time and thus becomes a finite set. In ITLAD this means the returns can not be eternal, and must be finite (many many many many times in action, but finite nontheless), it also means Nietzsche was wrong about the Eternal Return, but it's only through the advances made in Quantum Mechanics that we can know this. The thinking at the time of Nietzsche was insufficiently advanced enough to comprehend the solution, this is why classical philosophy, along with every other aspect of life, must always be evolving.

"So could it be that time is a wave function that is also collapsed by the act of observation? If this is so then time really is created by the observer ... we all exist in our own time scenario. Indeed if we apply the ORC-R theories of Penrose and Hammerhof to this idea we have something profoundly itladian ... and something that can be used to explain the subjective and glutamate facilitated time-dilation effect that is crucial to my "Cheating The Ferryman" theory of what happens to human consciousness at the point of death."

The problem with TIME is that is seems to be purely a construct of consciousness; it has no objective reality outside of perception. Einstein’s theory of relativity – the combination of his General and Special relativity theories – dictates that all photons, the carrier of electromagnetic radiation of all wavelengths, including gamma rays, X-rays, ultraviolet light, visible light, infrared light, microwaves, and radio waves, must move at the speed of light. The Major Atmospheric Gamma-ray Imaging Cherenkov (MAGIC) telescope sited on La Palma in the Canary Islands has found that gamma radiation emitted from a distant galaxy arrived at earth four minutes after lower-energy photons, despite apparently being emitted at the same time. If this information is correct – and Daniel Ferenc, a physics professor at UC Davis and a member of the MAGIC collaboration says that a repeat performance will be needed to confirm such a finding – then the findings are in direct contradiction to Einstein’s theory of relativity. But in my opinion, it is more likely to be TIME that is the contradiction, and not the theories of relativity nor Quantum Mechanics; it is our erroneous understanding of TIME that has to change. Ferenc says that everybody at the MAGIC collaboration are "…very excited," and that they will now try to find a new source to test this theory on.
The current source of their findings is, quess what..................... Markarian 501, the galaxy more than 300 million light years from earth which Tony mentions in this post, with a "blazer" – a very compact and highly variable energy source associated with a supermassive black hole at the center of a host galaxy.
Part of the blazer includes a relativistic jet – an extremely powerful jet of plasma – that shoot out, amongst other things, gamma rays; the likes of which Reed Richards of the Fantastic Four never encountered. These jets can be carried as many tens of kiloparsecs from the central black hole, and are the focus of the MAGIC’s collaboration.
Joined by John Ellis from CERN who headed up a team of theoretical physicists, the MAGIC team were able to determine that low and high-energy emissions appeared to have been emitted at the same time. After traveling through space for some 300 million years, the high-energy emissions were late by four minutes.

PhysOrg.com: Gamma Ray Delay May Be Sign of 'New Physics' from October 2007