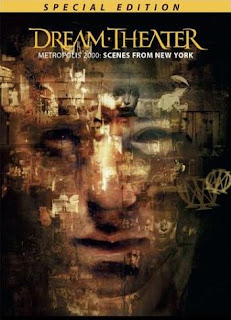 I was looking at the cover of the Dream Theater video (which according to the internet was released in April 2001 and I assume it is the original cover.

The main picture is of an impassive face but look closer and there are lots of individual photos of different people. I still have a copy of
'The Times' for the 15th September 2001. This has the complete front and back pages covered in photographs of some of those who died (other papers probably did something similar). I also recall relatives and friends pinning up pictures of the dead and missing near the scene.

The top left hand corner is also interesting. The white picket fence is a very similar visual image to the bottom half of the famous picture of the metal ruins (page T15 of my newspaper.)

I also think that I can see a plane about to crash into a building. OR
THEN AGAIN PERHAPS ITS JUST MY IMAGINATION. or perhaps it wasn't just the album cover that was prophetic.

Finally it is fascinating to note that the Dream Theater album “Scenes from New York - Scenes from a memory' has a track listing which includes the following itladian titles: 'Strange Déjà vu’ and 'Fatal tragedy'

Posted by Doppelganger at 08:39

PETER R: Thank you for your totally unsolicited emails to me. If ever I wished for proof of the power of ITLAD and CTF you have supplied it. It is one thing having people accept your theories after reading the book or seeing me lecture ... but quite another to have someobody who was totally cynical and sceptical to be turned around by their own Daemon ... and then be motivated to write to me about it.

I have now had the chance to check out the track listing of this album (which I have never done before ... I assumed that the cover and the fact that the album was released on the actual day the events of 9/11 took place to be enough evidence of Daemon-induced precognition) and it made what little hair I have stand on end (with my haircut it does this naturally but you get my drift).

For those of you who have read the book get these itladian track titles:
Disc 1
1. Regression
3. Strange Deja Vu
4. Fatal Tragedy
5. Beyond This Life
10. The Dance of Eternity
Disc 2
1. One Last Time
2. The Spirit Carries On
3. Finally Free
Disc 3
1. A Mind Beside Itself - which includes a movement entitled "Voices".

You have to agree this is really weird. An album released on 9th September 2001 with the image of the Twin Towers in flames on the cover and then a track listing that could have been influenced by itlad! Talk about weltgeist!

I plan to go out and try and buy this CD today. I have a weird feeling that the lyrics may contain even more synchronicities.....

Truly amazing and it's great that you can still be spooked by it Tony and not get blase.

Tony: I have this DVD as an .avi video, so I'll burn it onto a disc for you and bring with me tomorrow.

KARL: Yet more synchronicity in that you actually own the DVD that Peter R analyses so will in his posting.

Tony: YAS indeed!
I don't have the DVD but I do have the .avi video from the DVD (1 DVD-R can thus hold about 8 full length concerts) so it is easier for me to burn it to disc for you for Wednesday.

I may even have placed some Dream Theatre on one of the discs I've previously given you.


That is nicely put Robin


Those track titles are amazing!!!