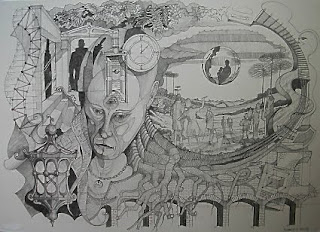 Richard Boote, whose work I have mentioned before on this Blog has a new exhibition of his work planned. This will take place at The Chasewater Visitor Centre Gallery, near Cannock near in Staffordshire 09th March to 11th April 2010.

Richard is one of a growing group of artists, poets, musicians and even clothes designers, whose work has been profoundly influenced by my Cheating The Ferryman and Daemon-Eidolon Dyad theories. The picture above will be the centrepiece of Richard's exhibition and is also his largest work to date. It is called The Daemon and it is Richard's attempt to depict the contents of a vision that he had many years ago .... a vision that he now considers to be an encounter with his Daemon.

Richard's new website can be viewed at http://richardboote.co.uk .
Posted by Anthony Peake at 13:02 2 comments: