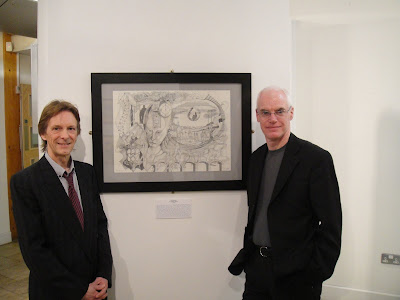 On Saturday 20th March 2010 my wife and I were guests at a private "Launch Party" of an exhibition by the newly formed "Daemon Art Group" at the Chasewater Centre Gallery near Cannock in Staffordshire. I am really honoured that the three artists involved, painters Mark Lippett and Richard Boote and sculpture Steve Eastwood have named their group, indirectly, after my second book "The Daemon - A Guide To Your Extraordinary Secret Self". This was at the suggestion of Richard whose art and creativity has, in some small way, been influenced by my own writing. Indeed three of Richard's amazing paintings reference my Daemon-Eidolon Dyad concept. Above is a photograph of myself and Richard standing in front of his massively itladian major work, "The Daemon".

In my opinion Richard's work is profoundly meaningful and he is using his art to explain in images what I try to do in words. Indeed I am so taken by his imagery that I have bought for pride of place in my study his painting "The Burdon of the Eidolon". This will now inspire me in my own writing. This can be viewed in an earlier posting on this site:

I must also say that the works of other two members of the group are also both fascinating and challenging. I wish the Daemon Art Group all the best for the future.

indeed with the launch of Bozack Clothing in New York last week the influence of ITLAD is evident on both sides of the Atlantic and across very different applications.. To check this out follow: 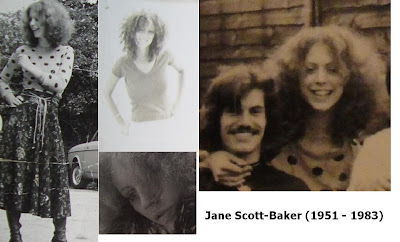 I have had many requests for any pictures of the young lady who introduced me to Symi island in Greece back in 1978. I have decided to place the montage above on here so that any visitors and interested parties will check out this site as well.

I have placed this posting in memory of a beautiful woman who died far too young. I hope that my hypothesis is correct and that Jane's Daemon managed to avoid her personal tragedy when she followed her next Bohmian IMAX.

Pedi was the location of a curious "message to the future" from the past that I describe in the introduction to my second book, The Daemon - A Guide To Your Extraordinary Secret Self.