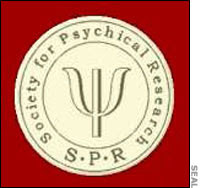 Last night I was delighted to receive a copy of the Society of Psychical Research (SPR) review of The Daemon. I received it "out of the blue" from one of their Officers. I had long known that the SPR had reviewed ITLAD and, for some reason, I was worried about what they may say. I guess that my logic was that the SPR is an organisation that I have always held in awe ever since I was a child and I first began reading about unusual phenomenon. Back in 1969 I used to receive a weekly copy of a part-work called Man, Myth & Magic and in the early 1980's I collected a similar series (although slighly less intellectually challenging) called The Unexplained. Both these works were full of learned articles written by members of the SPR. I read more about this organisation and found that they had been founded in 1882 by Henry Sidgwick, Professor of Moral Philosophy at Cambridge University, and had, over the years, some great thinkers, scientists and philosophers within its ranks. A few years later (1886) a book that was to have a huge influence on my own philosophy was published by the SPR. This book was entitled Phantasms of the Living and was written mainly by Edmund Gurney, together with Frederic Myers and Frank Podmore. I re-read this book whilst researching material for The Daemon and I was stunned with how my Daemon Hypothesis can be applied to many of the cases reported by Gurney et al. A few years later one of my all-time intellectual heroes, William James, was to join the ranks of the SPR.

Over the years this organisation has attracted some of the best brains of each generation, radical thinkers who were willing to risk carefully built academic reputations to pusue understanding of areas of experience that did not fit into the scientific paradigm of the time.

As such the opinion of the SPR was of great importance to me. For them not to like my book was a possibility, and something that I would prefer to be in ignorance of. However yesterday I was sent a pdf of their review of The Daemon...and on reading it I found that the reviewer gave it a reasonable review. Indeed in my opinion the reviewer, Robert Charman, writes an excellent précis of the whole ITLAD/CTF hypothesis and in doing so he has given the members of the SPR an excellent understanding of what I am trying to explain.

It is of no surprise to me that the SPR focuses on the one element of ITLAD/CTF that does not fit in with their research findings …. That consciousness is simply an epiphenomenon of the brain and as such cannot exist outside of the brain. However on careful reading of my work it will be seen that I leave this question open. I can see evidence that the brain may also be a receiver of some description in which case consciousness may exist in another “place”. My problem with this was that such a concept falls into the classic Dualism trap and despite much research no hard evidence has been found for such a conclusion.

But there is considerable subjective and experiential evidence for this conclusion. Distance viewing, telepathy, out-of-body experiences, Astral Travel and many other well documented phenomena suggest that consciousness is more than just a “brain-state”.

As such my involvement with the SPR is, yet again, phenomenally synchrondipitous. Last night I was also sent a pdf copy of their review of ITLAD (Robert Charman again). This is another very fair and well thought-through review. Robert is obviously a very careful reader and does an excellent job. This stimulated me to do something I had long planned to do …. Join the SPR. I emailed my contact (Tom Ruffles) to let him know that I was doing so. Tom replied asking if I had considered doing a lecture for the SPR! Wow! What an honour that would be. But of course the timing is exactly right because Karl and I will be presenting BIGTOE to the world via our Edge Media TV interview which will be recorded on Friday 21st. Bringing together my ITLAD/CTF with Karl’s CtCw will, in one perfect synthesis, explain all the phenomenon discussed above whilst still remaining true to the concept of the Bohmian IMAX.

I have informed both Tom and Robert about this TV programme and I am hopeful that they will inform the members of the SPR about it.

All very exciting ………. And, as I stated above, a classic case of synchrondipity!!!
Posted by Anthony Peake at 08:53

My lecture for the SPR has been confirmed for Thursday 4th February 2010.

Wonderful, Tony; what developments this past year! Bravo on all!

FORUM: The Society of Psychical Research (SPR) [by Tony]