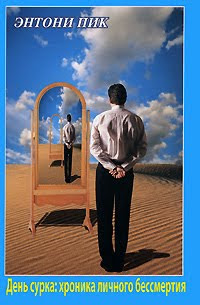 This morning I received my copies of the Russian edition of ITLAD from my UK publisher, Arcturus.
It is entitled День сурка: хроника личного бессмертия which, if my translation is correct means "Groundhog Day: Chronicle of personal immortality". Yet again it seems that a foreign translator has hit the nail on the head (you will recall that the Dutch edition was called Leven Na Leven Na Leven - "Life After Life After Life". I find it interesting that neither decided a literal translation of "Is There Life After Death". Clearly both translators had really grasped the theme!
I have attempted to contact the Russian publisher because I am sure that Russia could prove to be a really good market place for ITLAD/CTF. The issue is getting it marketed well over there.
I am hoping that soon we will be joined by some Russian Itladians who may see the links between my writing and the work of Petyr Ouspensky.
The Spanish language edition should be out soon as well .... what we need is French and German editions to follow soon. Indeed when in New York I met a young lady who was very impressed with my lecture. She was from China and said that she would send a copies of my books to a publisher she knows in Shanghai. If I can break into the Chinese market as well I will feel that we are really starting to make inroads into real "World Exposure".
Posted by Anthony Peake at 12:31

Tony - Wow, nice move into Russia. If you get it into Chinese though that's got to produce a large amount of interest!

Sorry for not keeping in touch as much - lots of Uni work!