Example of how Bohm's "Implicate Order" can be shown visually 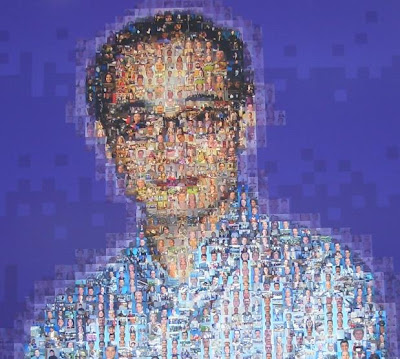 Whilst in New York I spotted this image outside the HQ of the Pfizer Corporation. I am hoping that me using this image is okay with them (if it is not please could a representative of that company contact me and i will take it down).

The image is of a Pfizer employee called Joe who works in the Bioinnovation Center in Massachusetts. If you look closely you will see that the image is made up of pictures of all his co-workers in this unit.

A couple of nights ago I was awake in the middle of the night and I started thinking about ways in which David Bohm's concept of "Enfoldment" could be explained in a simple and graphic way. This image suddenly appeared in my mind. I argue that when we are in these semi-awake states (Hypnogogia) our Daemons can communicate more effectively. It is as if the "Doors of Perception" are slightly ajar and ideas can filter through to the semi-conscious eidolonic personality.

My Daemon had given me the answer.

Imagine a picture similar to this of yourself. This picture is composed of micro-images of every human being on the planet. When looked at from a distance it is just a very detailed image of you. However, and this is the important point that I suspect the Pfizer image designer has not done, is that contained within the micro-images will be an image identical to the larger one .... in every respect. As such this image of yourself will, again, contain images of everybody else on the planet. But it gets even more interesting. Imagine that each of all the other images were designed in the same way (containing the micro-images of everybody else).

This is exactly what David Bohm was trying to get across in his dual concepts of "Enfoldment" and the "Implicate Order" - the idea that the whole contained the parts and that each part contains the whole. He used the analogy of a holographic image (smash a holographic image then look at the parts of the image under laser light and it will be seen that each part contains a denuded version of the original image not, as would be expected, the part).


I need to give this idea more thought but I did present it to the audience at my lecture yesterday and it was received very well. I may acquire the software that generates these images and see what can be done.

On Saturday 21st of November 2009 I will be attending an "Open Dialogue" meeting at Queen Mary College in London. This has been arranged by the Scientific and Medical Network (SMN). Under the title of Infinite Potential: The Legacy of David Bohm such lumimaries as Prof. Basil Hiley and Dr. F David Peat will be discussing the scientific philosophy of this great man (the person I try to honour in my term The Bohmian IMAX. I am hoping to discuss this analogy with David and, hopefully, Prof. Hiley.
Posted by Anthony Peake at 08:29

Isn't this effectively what fractals are all about? As they are mathematically derived, perhaps so is the worlds within worlds, atoms within atoms repetition concept? After all, all sub-atomic particles (of the same kind) are regarded as identical.