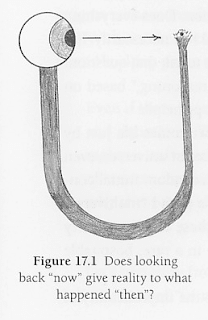 Another interesting speculation brought up the "Quantum Enigma" (see previous post) has to do with creating a new reality.

The quandary is that if all reality is created by our observation, then does not "looking back 'now' give reality to what happened 'then'?" (John Wheeler, in the 1970s). So, it takes observation to bring reality to the Big Bang but whatever is doing the observation must have been created after the Big Bang---a rather self-referential bit of logic.

[quoting from the book now because it's so much easier than trying to summarize a summary ...]

"Accepting the boggle, we might ask: Though we could only create a universe in which we could exist, is the one we did create the only one we could have created? With a different observation, or different postulate, would the universe be different? It has been wildly speculated that postulating a theory that is not in conflict with any previous observation actually creates a new reality.

"For example, Hendrick Casimir, motivated by the discovery of the positron after its seemingly unlikely prediction, mused: 'Sometimes it almost appears that the theories are not a description of a nearly inaccessible reality, but that so-called reality is a result of the theory.' Casimir may also have been motivated by his own prediction, later confirmed, that the vacuum energy in space would case macroscopic metal plates to attract each other.

"If there's anything to Casimir's speculation, might Einstein's original suggestion of a cosmological constant have caused the acceleration of the universe? (Such a speculation can't be proven wrong.) Though taking such ideas literally surely seems ridiculous, we see how outrageously the quantum enigma has allowed us to speculate."

NOTE: The comment about Einstein and his cosmological constant refers to Einstein's initial theory of general relativity containing a constant, a fudge-factor more or less, that adds a repulsive force to keep the universe stable. But in 1929, Hubble announced that the universe is not stable but expanding and, therefore, Einstein's fudge-factor was not needed. Einstein called it the "greatest blunder of my carerr." He realized that had he believed his original theory, he would have predicted an expanding universe decades before it would be discovered. But the story continues because the effect of dark matter (no, not the "dark matter" of our Dark Philosopher's brain---although that is a force to be reckoned with and, perhaps, should be included in the equations) is a repulsive force not accounted for in the equations. Thus, Einstein's cosmological constant is back in the equations.
Posted by ken at 17:47

This is a afascinating topic and one that is crucial to CTF and ITLAD. The nature of the external world is of huge significance for ITLAD (is it 'real' or a very clever illusion?). According to ITLAD many of us exist in what I term "The Bohmian IMAX" - that is a three dimensional recreation of our previous life woven from memories.

However if Wheeler's suggestion is to be believed then the original universe ... the universe that was responsible for the external world that is recreated within the Bohmian IMAX (Karl L Le Marc's "Virgin Life")... is also an internally created one.

This description of reality as "Maya" has been discussed many times on this blog and so it should be again. I therefore welcome this post and hope it will restimulate even more debate.

KEN - would be great if you placed all three of your recent postings on the FORUM under the "Quantum Physics" - I am keen to get this debate going on there as well as here).

You may also be interested to know that this very subject was discussed at last week's SMN (Scientific & Medical Network) meeting in Manchester. A fascinating presentation was given by molecular biologist (and member of this blogsite) "Persephone". She was discussing consciousness and its relationship to "reality". Clearly even to the scientists and physicians of the SMN such a concept is a difficult one to grasp (as Rosenblum and Kuttner regaularly point out in their book). One or two questions were slightly hostile towards her and I made a short speech highlighting tyhe fact that it has long been suggested that sub atomic particles seem to pop into existence as soon as the are postulated by scientists. it is as if the thinking about the particle creates it in 'reality'.

This belief is itladian in the extreme.

I have taken the liberty of emailing Bruce to let him know of this discussion thread.

"So, it takes observation to bring reality to the Big Bang but whatever is doing the observation must have been created after the Big Bang---a rather self-referential bit of logic."

*smile*
Now, you KNOW I can answer that don't you?

For several weeks I thought I had defeated my own QUANTUM GRAVITY theory using the Casimir Effect until I delved very deeply into the Quantum Mechanic Matrix Mathematics and showed that it actually worked! Which was nice!
(I'll refrain from posting the workings out but if anyone really want them then I am happy to email them if you can't sleep and wish to plow through a dozen pages of differential equations)

The Vacuum energy is integral to CtCw and general field theory (once again, see MOBIUS DICK for a prime example of its progress into accepted ideology) and whilst Einstein himself called his Cosmological Constant his "most embarrassing mistake", it is now certainly at the forefront of Quantum Mechanic theory and the Standard Model of Particle Physics incorporating the Higgs Field and Dark Matter/Dark Energy (more of which we hope the Large Hadron Collider experiments in CERN will provide once they can get the thing to work for longer than a couple of days)

this may be intersting:

As the LHC supposedly gears up, Harvard physicist Kevin Black, based at CERN, investigates rumors that the particle accelerator may, in fact, soon be shut down—by ripples from the future. http://fqxi.org/community/forum/topic/230

this could be interesting in the context of the things discussed here: As the LHC supposedly gears up, Harvard physicist Kevin Black, based at CERN, investigates rumors that the particle accelerator may, in fact, soon be shut down—by ripples from the future. http://fqxi.org/community/forum/topic/230

Just to let you know that last night I received an email from Professor Rosenblum. He has read the comments and is pleased that we are taking the implications of partical physics seriously and discussing them in a dynamic and challenging way.

Anonymous: Yes, that is a very interesting piece isn't it. I want to look into this a bit more before commenting further, but I will probably add something to the FORUM: Large Hadron Collider post soon.

Tony: That's fabulous news, and hello to Prof Rosenblum, it would be superb if he were to join in or contribute to BLOG and FORUM.