Neurological proof of my Bohmian IMAX? - The Zeitraffer Phenomenon 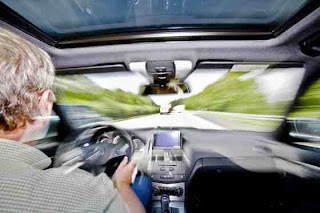 In my research I have just come across a fascinating, and little reported, neurological condition called the Zeitraffer - Elebnis Phenomenon. In German a "Zeitraffer" is an apparatus that accelerates the apparent motion of a film. This is used in a similar way to time-lapse photography.
It seems that for some people this apparatus is not needed. Under certain, little understood, neurological conditions, the world is suddenly perceived to be speeded up. One particularly fascinating case is cited by Ferdinand Binkofski of the Department of Neurology of the Heinrich Heine University and Richard A Block of the Department of Psychology and Montana State University. The paper was published in Neurocase (1992, vol 2 pp. 485-493) and was entitled Accelerated Time Experience after Left Frontal Cortex Lesion.
Block and Binkofski report that a right handed, 66 year old retired clerk with no history of neurological disease was driving his car along a German road. The man (known as BW) was horrified to discover that suddenly external objects starting rushing at him at great speed. As he described it it was as if somebody had pressed a fast-forward button. He also found that his car was also running at a fantastic speed. He could not control the car as his reaction time remained 'normal'. He found himself driving througha set of red traffic lights because he simply could not stop. He slammed his brakes on and stopped the car. He watched in horror as the world around him still ran around him in super-speed.
This state continued for him and two days later, in a state of great stress, BW was admitted to the Heinrich Heine Neurological Hospital. He described what was happening as an "accelerated motion of events, like a time-lapse film". He complained that he could no longer tolerate watching television because the progression of events was too quick for him to follow. He also described that life had begun to pass too quickly for him.
On his admission to hospital a CT scan was done it showed that he had a lesion on his dorsolateral pre-frontal cortex. He was then given a series of tests. He showed no prtoblem with time orientation, it was just for him it was going faster. However when asked to decide how long a 60 second period was for him some strange things were discovered. BW was told to say when he wished to start then remain silent until he felt that a minute had gone by. He was then to say stop. They repeated this test many times and his BW's subjective average 'minute' was 286 seconds.
It was then discovered that BW had a glioblastoma tumour centered in "Brodmann's area" in the pre-frontal cortex of his left hemisphere. Sadly he died soon after without ever regaining normal time perception.
Now what is interesting about this paper is that the two scientists suggest some possible explanations, including one that we all have an internal "pacemaker" that controls how we subjectively perceive time duration. However they finish off by writing "It is unclear how best to explain the phenomenon".
May I suggest an itladian interpretation. as we have discussed elsewhere in this FORUM, there seems to be a link between certain aspects of ITLAD/CTF and the prefrontal cortex, possibly this link may prove as significant as the link to the temporal lobes. As such could it be was that what happened to BW was that the tumour had caused a problem with the 'viewing' of the "Bohmian IMAX" - that it suddenly got stuck in "fast-forward" mode? How else can neurologists explain such a perception. In order to be placed in "fast forward" there has to be a recording to run faster. as such it was not his perceptions that ran too fast but the external BIMAX film was running too fast.
Of course there is an even more controversial conclusion .... and that is that BW's Daemon had again failed to avoid the development of the tumor in this run of the BIMAX and decided that it wanted to get quickly to the next performance. It knew that there was nothing it could do and recalled that last time BW was in pain and discomfort for too long. By "fast-forwarding" the BIMAX the Daemon had its Eidolon experience those painful last few weeks in a blur of speeded-up time!
So here we have yet another term for our ITLADIAN dictionary - "Zeitraffer" - when time runs faster within the BIMAX.
Posted by Anthony Peake at 16:41

Well, whatever the reason, that's gotta mess with your mind.