Now we have "Itladian Art" as well as itladian literature! 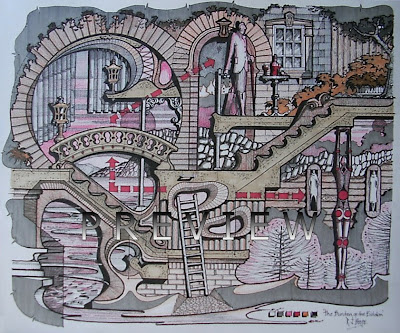 I received a fascinating email from artist Richard Boote. Richard has read both my books and is now painting pictures that attempt to explain my Daemon-Eidolon Dyad. The picture above is entitled "The Burden of the Eidolon. Richard has explained the symbolism to me in this way:
'The Burden of the Eidolon' was inspired by your work its true. That particular piece is really to show empathy towards the incarnate soul, and all that it has to endure in its physical existence (hence the figure in the bottom right). The picture also questions why some souls have an easier incarnation than others. The ladder bridge and stairways denote progress; the lanterns represent learning and spiritual illumination. The figure at the top of the picture appears to have an easier life; there is foliage on the trees by this figure, as opposed to the dead looking trees in the lower part. That is just one interpretation, other people prefer to see the picture in whatever way is meaningful to themselves."
I am really honoured that such a talented painter is interested in my theories as an influence on his art and now Richard informs me that his next painting will be a work involving "The Daemon". I am really looking forward to seeing this piece.
If you are interested please check out Richard's work at:
http://www.richardbootefineart.co.cc/

Knowing you as well as I do, I understand how enormously flattered you must feel. It's tremendous that ITLAD is reaching out across the cultural archipelago; beautiful work.

On my very first look at "The Burden Of The Eidolon" I was immediately struck by the similarities to the lithograph of M.C Escher, "Relativity"

However, on much closer inspection I see the inclusion of the Daemon-Eidolon imagery and the subtle allusions to the duality within the subjectivity and objectivity of Consciousness.

I too look forward to seeing more work of this nature. Superb.