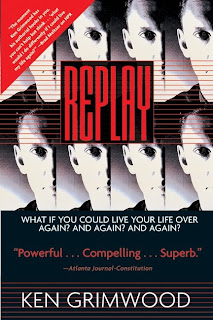 Today I was in the process of trying to source a book entitled Replay by a writer called Ken Grimwood. This book is profoundly itladian in that it gives a fictional account of a person who lives his entire life over again, but this time he "remembers" what happens. In itladian terms what this describes is an Eidolon who is aware of its own Daemonic memories of the previous run-through the Bohmian IMAX.

I succeeded in my search and I will be receiving a copy in the next few days. However, in doing a Google-search on "reliving one's life" I came across a simply amazing letter published in the periodical The American Journal of Psychiatry (143:3, March 1986). The letter was sent by an extremely puzzled and very intrigued psychiatrist by the name of Dr. Jerome M. Schneck. If ever I needed empirical (albeit clearly subjective) proof that I am really onto something significant in my ITLAD/CTF hypothesis this is it. Dr. Schneck wrote:


SIR: I would like to describe a patient's delusion that is unlike anything I have encountered before.
Ms. A, a 36-year-old woman, was sent by her employer for a medical examination because she was said to be uncooperative with her co-workers. The examining physician referred her for psychiatric evaluation.The patient was schizophrenic, was vague about any history of inpatient or outpatient psychiatric treatment, and had been advised to take haloperidol and other medications but never filled in her prescriptions. She was loquacious, at times irrelevant, and yet was coherent and capable of offering direct answers to specific questions. She described having hallucinations in which she saw tents and thrones "inhabited by God."She denied having any feelings of depression or anxiety. Her attention and concentration somewhat wavered. She seemed fascinated by her unusual claims. Despite having had previous psychiatric contacts, she denied having psychological problems. She had occasional ideas of reference but declined to describe them in detail.The patient spontaneously revealed the delusion she harbored that she relived her life from moment to moment, each day, week, month and year. She did not claim that she had lived other types of lives in the past or that she would relive this one in the future, after her death. But she insisted that this life was a thorough duplication of her past life. She denied experiencing reincarnation in the sense of having previously lived in some other way or form, nor did she necessarily expect a reincarnation in the future. Her experiences were not the usual well-known deja vu but the re-living of a life span in specific and exact sequence, one event after another in proper order. She claimed that her ability to fortell events because of her reliving often frightened her as well as others. She said her facility to recall past events in detail also frightened others, but she asserted that her recollections were valid and accurate, even for time periods in infancy that are not ordinarily remembered. She claimed that other individuals confirmed her recollections, but she presented no evidence for this claim
I report this case to alert others to this delusion type and to encourage others to report on any similar patients they might have treated.

For me this report is absolutely fascinating and probably one of the most crucial cases regarding ITLAD/CTF. I have tried to trace Dr. Schneck but thus far with no success. He was based in New York so it is my intention to try and trace him, and possibly speak with him whilst I am in that city in August.

It is interesting to observe that this lady had been diagnosed as schizophrenic. Could it be that her odd perceptions themselves had brought about this diagnosis? If so then by implication anybody who may perceive elements of the Bohmian IMAX will be quickly labelled with this "illness". However what if this is not an illness but a glimpse of the true nature of existence? I am sure that Dr. Rick Strassman would agree with my position on this having tested out such a proposition with his work on DMT (N,N-dimethyltryptamine).

A careful reading of this report begs some strong questions .... for example, did nobody think to test out the woman's claims that she could perceive the future? Surely this would have been easily tested? But it seems that nobody bothered (of course, if one accepts what many deja TLErs have told me, that the very communication of what is about to happen to another human being will ensure that that the universe splits and a new future is created to accommodate the change from what happened "last time" - i.e. last time the subject would not have made the prediction and as such the very verbalisation of the fact changes peoples actions and reactions).
She was also quite precise in her point that this was not a form of reincarnation but a "reliving" of the same life. Something that I have stressed many times in my lectures when people assume that I am talking about a form of "reincarnation".

I am interested in any comments anybody may have with regard to this case ..... and even more interested if anybody has access to any further material to do with this case, or any similar.
Posted by Anthony Peake at 14:41