Hugh Jackman and "The Fountain" 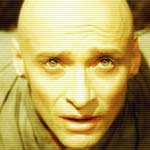 Several posters to this blog have mentioned the film "The Fountain," which is definitely a must-see for anyone interested in ITLADian concepts.

It's difficult to describe exactly what this film is "about," but it's been described as "a love affair that transcends time." I'd prefer to leave the more detailed analysis of the film and its ITLADian implications to our resident film guru, HurlyBurly, once he's had a chance to watch and digest it -- for one thing, I think I'd need to watch the film several more times before I could do it justice. However, I just wanted to highlight an interview with Hugh Jackman which appears as a Special Feature on the DVD and which fits in with Tony's idea that ITLAD is part of a broader cultural phenomenon engineered for some ulterior purpose, with the participants (screenwriters, actors, etc.) not always necessarily fully aware of how their work fits in with the theory.

In the interview (which originally aired on MTV, I think), Jackman describes how he felt on first reading the script for "The Fountain":

"I had this feeling of hope; I just felt very light. . . . I thought, there's some message here that really connects to me. . . . I felt like it was a myth, a modern-day myth. I couldn't necessarily [explain] all the themes, etc., of the piece, but it really connected with me, and I thought, 'Yeah, this is what life's about.'"

He said that if he had to sum the film up in a few words, he'd say it was about the importance of dealing with death before you can fully live.
Jackman said his feelings on reading the script were so strong that he committed to the project immediately, even before he's spoken with his agent. And once the film had been made, he felt "exhausted yet satisfied." He described the experience as "an opportunity I've never had before."

I found this interview inspiring and encouraging. It reminded me that the ideas raised in "Is There Life After Death?" ring true for many people. And it confirmed that "The Fountain" -- like many of the films with ITLADian references -- requires and deserves multiple viewings.
Posted by Dreamer at 07:44

I'm off Friday this week, shall probably watch it then.