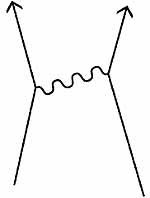 In response to Carenza's wonderful electron theory I have posted below the section from the original version of ITLAD (then called 'Cheating The Ferryman') that never made it to the final version - in fact a lot of the supporting science was lost between the first and second version. This refers to Richard Feynman's 'One-Electron Universe' theory.
"The famous and extremely charismatic American Particle physicist Richard Feynman took this idea to its logical limit and proposed that there is only one electron in the universe. He suggested that this particle moves backwards and forwards in time with such an elaborate trajectory that at any moment we think we see many of them. He came to this conclusion after reviewing what actually happens in a collision of a gamma ray photon (see diagram) hits matter. The collision takes place and an electron (e1) shoots off in one direction and a positron shoots off in the other. The positron then collides with another electron (e2). The collision causes this second electron and the positron to be annihilated creating a photon once more. The net effect of this is that electron e2 had disappeared to be replaced by electron e1. Feynman suggested that even though both electrons are in existence at the same time they are, in fact, the same particle. He considered that the journey that the positron takes from the point of its creation with the gamma ray to the impact with electron e2 is, in fact a reverses journey, a journey backwards in time!

As such there is a continual ‘time-line’ of the same electron. It is, initially e2, it then collides with the positron and, in the guise of the positron goes backwards in time to become the original electron e1 that was caused by the first collision. It then changes time direction by becoming an electron again and carries forward in time. As Davies says:

“In its normal, electron phase, (e2) emits a photon and bounces back in time, then absorbs a photon and rebounds back to the future again. An observer located in time would see two electrons and a positron. But Feynman says this is really only one particle seen three times”.[i]

From this Feynman postulated that all the electrons in the universe are just this one particle bouncing backwards and forwards in time. In other words, as Paul Davies says:

“You and I, the Earth, the sun, the Milky Way and all other galaxies are composed of just one electron (and one photon and one neutron too) seen sqillions of times over. This offers a neat explanation as to why all electrons appear to be identical”.

This will also predict that the universe must be made up of equal amounts of matter and anti-matter, because every ‘zig’ must have a ‘zag’."
[i] Davies P “About Time – Einstein’s Unfinished Revolution” (Viking) Page 206 (1995)
Posted by Anthony Peake at 11:52

Yes, that sounds plausible. My idea comes from the standpoint of an 'unindustrious electron' - it will appear in many places if it just sat there doing nothing! No zig-zagging required!

If my idea is correct then the universal cycle is the circular duration (time it takes to return to the same point on the circular time axis) multiplied by the number of times each particle is repeated. That's a lot, but we're long past being astounded by unimaginable numbers, aren't we?

In practise of course, you won't detect a difference between any of the 'copies' of the electron, so the cycle is just the time axis circumference.

It was John Wheeler, not Feynman, who (informally) proposed the "one-electron universe theory," when Feynman was Wheeler's student at Princeton. Feynman shot that idea down immediately. (This is documented in both Mehra's and Gleick's biographies of Feynman.)

As for Davie's observation that Wheeler's theory "offers a neat explanation as to why all electrons appear to be identical," the reason for that is because if they weren't identical, we would call them different things, like, for example, muons and taus (which are leptons identical to electrons, except more massive).

Michael,
Thank you for your comments and welcome. Clearly you are not to know this but in my comment on Carenza's 'The Title I would Choose' posting I described how Wheeler had first suggested this possibility to Feynman (as I recall it was in a telephone conversation back in 1940). Having said that I thank you for this correction because for me accuracy is paramount.

Thanks also for your comment with regard to Davies' quote which, of course, makes absolute sense.

I strongly suggest that any members of this blog who are interested in the work of this great man should check this out.