All Along The River 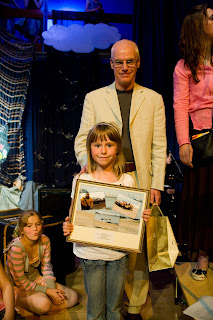 On Saturday afternoon I was guest of honour at a performance of "All Along The River" - a stage extravaganza written and directed by playwright and poet Bev Clark.
The performers, school and community groups from the Wallasey area, showed the depth of talent that Wirral has and was a magnificent contribution to the Liverpool Capital of Culture celebrations. Over 150 children and adults were involved in this massive undertaking and all concerned should be congratulated.
After the performance was completed I was asked onto the stage to present a series of prizes to local school children. Although seeing me and listening to my short speech was probably something of an anti-climax for the audience I was delighted to be associated with it all.
The photograph above is one of the prize winners, Allanah Bruce, wondering who on earth the guy standing behind her is!
As a great fan of Itlad, Bev will be placing a link on her website to our little blogsite here and the Forum - so who knows how many new itladians, both young and not-so-young, that we may attract.
Full details of the performance can be found on Bev's website:
http://www.handinhandtheatreproductions.co.uk/
Posted by Anthony Peake at 11:51

I totaly approve of the "Miami Vice" jacket. I have one myself!

That photo is beautiful, it is adorable! (will read post and check out link as well).

Tony: Viewing blog for first time today from the balcony on my apartment in Liverpool!
Ha! The Opulence!

Don't wear the jacket this evening mate, it will clash somewhat with my Trilby!