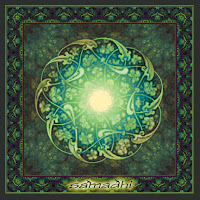 I am really pleased to find that my lectures attract a very broad spectrum of people from many traditions. This really adds to the cross-fertilisation of ideas when we have our open sessions at the end. It is interesting that Buddhists and Yoga teachers seem to be particularly interested in CTF/ITLAD. On Saturday in Totnes for example there were two ladies who followed the Thai Forest Tradition (Wat Nong Pah Pong - วัดหนองป่าพง) who engaged me in two separate, and fascinating, conversations. After meeting the Buddhist monk Ekkagato Bhikkhu at the Forest Hermitage near Warwick last summer I have been following up some themes that he suggested to me that hot, and very enlightening, afternoon

I have recently come across the term samadhi , this is a state of super-awareness which is brought about by profound yogic meditation. This state is when all mental functions except consciousness have ceased. In this state of of pure awareness, the yogi ( ie the practitioner) is aware of his or her own existence, but without thinking. In doing this the practitoner attains a sense of oneness and identification with his or her 'Atman', or true soul. This state is known as Nivikalpa Samadhi - pure awareness.

My Buddhist friends have told me that in their opinion this unified state of consciousness is very similar to my Daemon-Eidolon Dyad. Indeed I am coming to the opinion that the many re-runs of the Bohmian IMAX come to an end when full union between the Daemon and the Eidolon is achieved - Nivikalpa Samadhi. Certain adepts, after advanced and prolonged practice of yoga can reach this state. However I wonder if those adepts have achieved this state also because after many re-runs of the Bohmian IMAX they become attracted to Yogic techniques which in turn facilitates Samadhi.

In Samadhi all awareness of attachment to the material world, and all karma, is dissolved. Unless the practitioner eventually returns from samadhi, Nirvana, also known as Maha Samadhi, is reached. This state is also known to us as physical death. That is when the many cycles of my Bohmian IMAX come to an end and consciousness moves on to another plane of existence - just like Conners eventually moves onto the next day in the movie Groundhog Day so does consciousness. However, and this is where it gets interesting, it is believed that the truly enlightened can remain in Nirvikalpa Samadhi indefinitely while fully functioning in this world. These will be fully integrated human beings - in effect, Daemons that can directly interface with the real world without the need for an Eidolon. Is this not what all occult and magic traditions try to achieve?
Posted by Anthony Peake at 08:38

Perhaps this blog is the most fascinating I have stumbled upon during my short blogging career.

Many wonderful things to think about.

Thanks for your kind comments and welcome to our little community here. Any comments and/or observations you would like to make are more than welcome ... and anybody that likes Iron & Wine is even more welcome!

If you have any friends or associates who you feel would be interested in our discussions here please send them a link or simply let them know.

David,
I echo Tony's greetings, welcome to the cerebral jungle.

Tony,
I completely agree with your summation on your post that much of what was discussed with you is indeed what the occult and magickal (sic) traditions teach. To seek the key to Temple of the Gods - "The Pantheon Key" *wink*
Oneness within nature; within consciousness; within perfect conversation with your inner higher self (except me, who doesn't have one - obviously) *sigh*
Anyway, definitely need to talk to you about my new Many World Interpretation of Consciousness so I'll get the ales in.

I started doing Yoga at work....

*Karl likes to do this*

Viewing all that is said above by making reference to the eidolon/daemon dyad to me concludes all reflection on such matters on a very satisfactory and coherent note. Having attempted to understand religion and the occult through Peter Novak's Binary mind dogma was a beginning, which led through into terrible and horrific swampland. This seems a return to reason itself, after all. . .

Anthony said: "However I wonder if those adepts have achieved this state also because after many re-runs of the Bohmian IMAX they become attracted to Yogic techniques which in turn facilitates Samadhi."

I think this is a crucial point. I can't remember if it came from my reading the Yoga Sutras by Patanaji and commentaries or perhaps Ken Wilber or perhaps ?? but the samadhi state is hardly achievable by modern, especially Western, man in one lifetime. Unless we essentially pick up in the next go round where we left off in this go round, it will be impossible to ever reach it. There must be a cumulative effect. The alternative is the "you got one chance so don't blow it" mentality of Evangelical and Fundamental Christianity.

HELP!!!!! IMMEDIATELY!!!!!
OVER MY LIFETIME I HAVE WAVERED, AND READ AND WONDERED OVER SO MANY ,MANY THINGS!!!!!
LUCID DREAMS,LIFE AFTER DEATH, magic, CREATIVE VISUALISATION,YOGA, MEDITATION, TAROT, I CHING,positive thinking,SELF HYPNOSIS, BUDDHISM,AND THEY ALL SEEM RELEVANT!!!! AND NOW ANTHONY SEEMS TO BE EMBRACING EACH, ONE BY ONE!!!!!! WHICH IS REAL??? heeellpppp!!!!!
JESAMYN.

JESAMYN: The eidolon/daemon dyad is real, and Anthony is real. And Nietzsche and Jung, and Kierkegaard. All else hangs on these four. That is my belief. And I have delved into the others you mention as well; I view the latter as the flowering which is the glory and expression of the strong plant, comprised of the former.

All matter is merely energy condensed to a slow vibration. We are all one consciousness experiencing itself subjectively. There is no such thing as death, life is merely a dream, and we are the imagination of ourselves.
*smile*

Thanks Karl -if that really is you *tee hee*
So if these self actualizing individuals can live in the world with their fully integrated daemon how would they perceive the world of 'reality' and why are they not affected mentally as Tony believes some schizophrenics may be by an overload of access to the daemon reality?

JOHAR: As usual, you articulate the question which is lurking in my mind half-formed. It is a very good question. Elsewhere, he mentions Asperger syndrome as glimpsing the Bohmian IMAX, and I also wonder about many of that syndrome's symptoms, which seem to me to be classical "right-brained" reactions to things, yet causing marked deficiencies in functioning. As though the world itself would have to be different for there to be a real advantage to this perspective. Or something. . .

Johar and Susan Marie, interesting questions to which I refer you to a post I made many months ago on this subject (and upon which much further research has been conducted and more writing compiled by myself)
http://cheatingtheferryman.blogspot.com/2007/07/schizophrenic-influencing-machine-in.html

Thank you, Karl: I had read that article of yours some time ago, and just re-read it now. Have you published any of your research in journals? You and Anthony do segue and fuse at so many points.

Thanks Karl, Just read the article. Very interesting and possible in my humble opinion. Do you have any theories as to what might be causing these glitches between the Eidelon and the Daemon and what causes the Eidolon to have access to the Daemon which we don't normally have thus causing these mental illnesses?

Until I got Anthony's book a couple days ago, I was reading "Bohmian IMAX" as "Bohemian IMAX"! Needless to say, I was very interested in what this Bohemian IMAX was and where I could get tickets.

Bohemian IMAX!!! Really made me laugh out loud. Thanks Ken for brightening up my morning.

Made me dance a little Fandango!

That song is appropos, yet before your time, Karl. . .

I'm not THAT young (or Jung) Susan Marie !!
Still your cyber toyboy though
*smile*

KARL; I only meant that the song came out in the summer of '76 ( I remember vividly; I was in the midst of a nervous breakdown). . , Hence, you must have been a little boy; far too young and tender yet for such Queenish rantings.

. . . and feel an alarming, frightening gratitude for the cyber-boytoy remark.