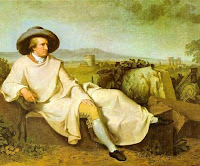 Jesamyn's question to Ron after his posting A STRANGE EVENT has stimulated me to post the strange event experienced by Johann Wolfgang Von Goethe. Goethe described the event in his autobiography Poetry & Truth (part 3, book 11). He wrote:

'I was riding on the footpath towards Drusenheim, and there one of the strangest presentments occurred to me. I saw myself coming to meet myself on the same road on horseback, but in clothes such as I had never worn. They were light grey mixed with gold. As soon as I had aroused myself from the daydream the vision disappeared. Strange however, it is that eight years later I found myself on the identical spot, intending to visit Frederika once more, and in the same clothes which I had seen in my vision, and which I now wore, not from choice but by accident.'
Let us review this whole event in the light of the information we now have. Goethe sees himself as he will be in eight years time. In my opinion this incident implies that Bohm’s concept of enfoldment, Herman Weyl’s explanation of Minkowski’s spacetime and my theory of a three-dimensional life projection may be correct. As far as my theory is concerned this incident is a simple programming error. For a second Goethe slips out of his ‘review’ and perceives an event that to him is yet to happen but within the timeless zone of the life review has concurrent existence. As regards Bohm’s theory incidents like this are bound to occur as areas of enfolded reality touch upon each other.

Another explanation could be found within Everett’s Many Worlds Interpretation. Goethe and his double inhabited parallel universes that just happened to overlap at that point. However for Goethe this explanation would have been totally unnecessary because within his philosophy this was not his first time living his life, he believed he had followed the same life course many times before. In 1813 he attended the funeral of the fellow writer and philosopher Christoph Martin Wieland. The death of this much-respected man stimulated a fellow mourner, Johannes Falk to ask Goethe where he thought Wieland’s soul could be found. After some reflection the great man embarked upon a lengthy and detailed reply. During the course of this Goethe made the following interesting statement:

I am certain that I have been here as I am now a thousand times before, and hope to return a thousand times. As such Goethe would not at all be surprised in meeting his own future self because, as he says, he has been through his life many times and as such has become more subconsciously aware of what is really happening to him.

Oh, That print is lovely; and I remember this Goethe passage from ITLAD well: Indeed, it was one of my favorite parts, and I highlighted and scribbled in the margin, as I am wont to do. I remember being up in Provincetown, MA on Cape Cod, and gazing intensely at a couple, speaking intensely and excitedly, almost like 2 children - and it is strange to say, but years later "that couple" was my husband, and me. Although bizarre-sounding, I am wholly certain of it. It was as if I had seen us in the future. No wonder they seemed so familiar!

Thank you Tony for the reminder about that Passage in the Book and Thank you too Susan Marie... before I really knew that my second partner was an ideal person for me(we only worked together) I had a dream that we were together and looking at a sunset..people at work were amused, as he presented as a fairly stern and dour type Scotsman!!! In later years while we were together, I had a very vivid dream of us looking at some sort of flower festival (we have them here) but it never eventuated, maybe next time!!Meanwhile COME ON SYNCHRONDIPITY .... I DARE you to let me meet my Doppelganger!!! Coming or going, either is fine...oh now that makes me wonder CAN WE ENFORCE THESE THINGS or must we wait passively for Magic Events to kindly deign to give us a glimpse...
Jesamyn