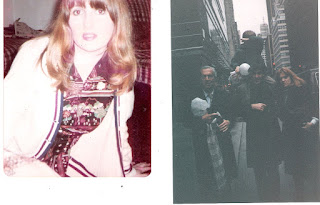 As this is apropos to quantum entanglement and synchronicity, I thought I would post this odd story. Susan Marie and I met in November 2007 on a Grief Forum Website, which SM had joined for the express purpose of telling others about ITLAD, the theory and text. Both of us had lost our husbands under similar conditions, after having similar and highly unusual relationships with these beloved men.
We came to know each other, both joined Anthony's blog, and communicated by E mail.These facts emerged:

Both of us had spent our teens and twenties brooding in libraries, and came to love the works of Kierkegaard,Jaspers, Jung and Havelock Ellis;also Byron, Shelley, Keats and Bronte,both of us had aunts who were our mothers' older sisters, and with whom we had closer relationships than with our mothers, and who we lost to cancer in our 20's (SM was 29, I was 26) both of us had spent time in Paris at age 25, for unusual reasons;both worked briefly as reporters covering political events in our early 30's;both of us,together with our respective husbands. were close to a former mentor/Professor, who functioned like Uncles to both couples;both had tumultuous relationships with fathers who abandoned their daughters in girlhood. Both gave birth to one child only, a son born on Christmas Eve.And, at last, both of us were drawn to a Grief Forum in which neither of us felt we belonged,and became friends through writing each other about Anthony's book and theories.

Both became Blog members on Cheating the Ferryman, and both became rabidly envious of Anthony, Karl, and Hurly Burly!!!

What a fantastically sweet post(Nice things were said about me at the end? Really? I didn't even notice!!!!).

I'm glad you were both brought to this little corner of the world!

Thank you for placing these photographs on the blog. It really helps having an idea of what people look like. Strangely enough in my mind's eye I had imagined we both looking similar to how you really are.

Amazing how life entangles. It is as if everything really has a hidden purpose that we can only guess at. Unrelated events seem to move us down a particular path to lead us to this place at this moment. When I am in a particularly reflective mood I think of how a whole series of events from our distant ancestors crawling onto some Silurian beach 430 million years ago lead to me writing this post this sunny April morning. All the chance evolutions, chance meetings of ancestors, my relatives, my parents (and on and on it goes).

Of course this could be all to do with our Daemons but they can only influence our lives.

Itlad has opened many doors for me. I am now finding a group of like-minded individuals who share my wonder at the world around me and the magic of conscious existence - and also its profound mysteries.

We have all taken the first few steps on a journey. Who knows where we are being lead but I for one are very excited about it!

Quite simply, WOW.
On many levels.
*smile*

I feel deeply and honourably humbled by your words dear Jesamyn.

As the person that we are now is mostly an amalgam of all that we were and all that we have experienced and known, it is delightfully enlightening to see glimpses into this journey of those with whom we share thoughts via old photographs.

Jesamyn, I see a deep warmth and a curiously alluring sense of demurity mixed with a cheeky fun side in your eyes.

And Susan Marie, my Dear Lady, *Wildean bow*, memories fly and dance around throughout the day but a photograph like yours gives specific memories depth and vividity; thank you for sharing.

*whispers to Jesamyn: I'm looking forward to discussing with you off-blog, that which Susan Marie and I were discussing last night*

Yes, Hurly: The sad and unseemly truth is that Jesamyn and I are most disgracefully, blatantly, and rabidly envious of the 3 of you: Of Anthony as the great scholar and Master; of Karl as the dashing and brilliant man about town, and of Hurly as the young and beautiful British boy. We envision all 3 of you as possessing all the glamour and vitality of life, caught up in a magical whirlwind, while we pine away as weeping widows. . .

Just reading these last 4 comments i get the feeling you all suffer from the same disease that i do, that being

The inability to just write a simple message on a birthday or christmas card!!

Language has to be both enjoyed and explored!! Apparently!

HurlyBurly you "young and beautiful British boy" you !!

And Susan Marie, as ever my special Dear Lady:

"Laugh, and the world laughs with you;
Weep, and you weep alone;
For the sad old earth must borrow its mirth,
But has trouble enough of its own."

Is it possible you are twins separated at birth?

I did get your emails and have replied. I changed the text to plain hoping that might help. If
not I will investigate further.

What do you expect from the colonies, eh?

Hi Ruth,
Thanks for that, but I for one have not received any email from you so some further investigation from your end may be required.
Colonies!
*Tuts and shrugs*
*BIG SMILE*

And I agree, the relationship that Jesamyn and Susan Marie have found in each other via Tony and his blog is a beauty to behold, as indeed are the two ladies in question.
*smarm*