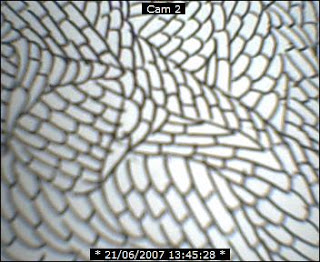 My latest lecture at Leasowe Library here on 'Gods Holy Acre' (Wirral) took place yesterday afternoon. I met up with quite a few really interesting people. As usual with my lectures the audience were somewhat surprised that they didn't get what they expected - a discussion about 'life after death'. Also as usual the post-lecture question and answer session was both lively and enlightening. From the feedback I received I think we have more members of our ever-growing itladian community.

At the end of the session I was approached by the name of Barry Hoon. Barry was fascinated by the implications of our Daemon-Eidolon Dyad in relation to his particular area of interest. Barry has developed a startlingly original aid to developing personal insights. He calls this 'Quantum Drawing'. It works in a similar way to those images that were popular a few years ago whereby you looked at a series of dots and swirls of colour and suddenly a 3D image leaped out at you. Barry's quantum drawings just look like a swirl of lines and boxes but as one looks at the picture images begin to manifest themselves. One asks a question then waits for the images to furnish an answer. To me it is similar to a visual version of the I Ching.
Barry said that up until yesterday he had not really reflected on the mechanism by which his Quantum Drawings work. However on being introduced to the concept of the Daemon he suggested that maybe his pictures facilitated Daemonic-Eidolonic communication. I am very excited by this possibility.
Check out this latest angle on the Dyad at http://www.quantumdrawing.co.uk/
Posted by Anthony Peake at 13:56

sounds very much along the lines of a Hawaiian technique called 'Hakalau' which means to focus and de-focus at the same time (those Hawaiian dudes seem to like mental conundrums as much as Karl!) which is very spacy when combined with Hawaiian Ha breathing, and no side-effects!

I also use these to help people learn Hawaiian Quantum Reading, which is reading 30,000 words per minute! which means you can read and retain c.80% of a book in an hour!

imagine how much knowledge you could cram in to a visit to the library, not to mention finally getting through that big pile of cool books you have staring at you right now?....;-)

simply put you are learning direct and cutting out the o-so-slow conscious mind!!

Evening Gary, pint of Bombardier is it, or can I tempt you to a join me with a real ale?

I'm glad someone else posted a comment on this thread as I'm very interested in the psychology behind stuff like this and all the adjoining mental conundra (what is the plural of conundrum anyway? Or am I just forming another conundrum there?)

It probably won't surprise you either Gary that I can speed read, although I nearly had an accident once when I hit a book mark at 100 words a second.

*allows the laughter to subside*

And one of the things I want to talk to you about, and I intend to email you in due course, is an interesting technique I am developing to, in effect, give the ambling consciousness a bit of a turbo boost. I tried a small experiment earlier today and it seemed to work. Could make a very interesting talk or even a workshop for those whose eyes are open to greater realities (and I suspect you know who I mean).

I really need to delve further into some of the Hawaiian philosophies and I hope you can assist me on that.