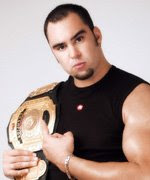 On Tuesday 19th of May I met up with a guy called Alex Spilling at The Bridge Inn in Port Sunlight. Alex was up in Liverpool on business and was keen to meet up with me. Alex has read ITLAD and he is a massive fan. In fact at 6 foot 5 inches he probably is literally the book's biggest fan!

But what makes Alex unusual is his alter ego. Alex is also Alex "The Showstealer" Shane - probably the most successful British wrestler of the last ten years. Still only 28 he has been twice FWA and WAW British Heavyweight Champion. As well as being a presenter on Talksport TV Alex now earns is living as a wrestling promoter. To check out the sheer power and presence of the man I suggest you check out his promo video on YouTube:
http://www.youtube.com/watch?v=sS2KQyPnT3U&feature=related
The song is also written and performed by Alex - bit scary eh?!!!
However he has another side to his personality - a quietly spoken, intelligent and extremely reflective man who has some fascinating, and totally itladian ideas and theories. He kept both myself and my friend Richard enthralled for nearly two hours with regard to his philosophy about the nature of reality. (After Karl and Ed's visit a few weeks ago the poor Bridge Inn in Port Sunlight is now getting used to itladian visitations!)
Alex is very keen to bring is promotional skills to marketing ITLAD and CTF and get the theory across to a wider audience. He has access to TV studios in London and he and I are considering a joint video programme. All very exciting.
Alex will be joining us all on this blogsite as soon as he has the time. Believe me his ideas will really blow you away .......
Posted by Anthony Peake at 10:15

Wow, very cool. Can't wait to converse with this enigma. How refreshing to see such diversity, definately a lesson to be learned about judging a book by it's cover.

I shall be keeping my now legendary low-profile on this one!!

Tony, I'm glad your conversation at the village went well. I too am interested in his take on your work, and new ideas he has to share.