Continuing on a Buddhist Theme 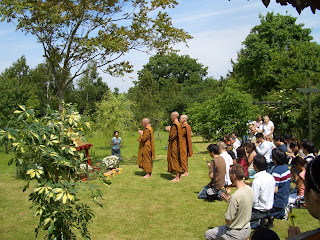 Last year a Buddhist monk travelled from Australia to meet me.
In a letter to me he explained that he had found a copy of a paper I had published in the Journal of Near-Death Studies lying on the floor of a hut in his monastery in Western Australia (The Bodhinyana Monastery in Serpentine, WA).
He knew as soon as he picked it up that it was of great importance. As with many Buddhist monks Ekaggata is a very well read individual with a great interest in particle physics and neurology. However he was particularly fascinated by my Daemon-Eidolon Dyad and my new approach to the concept of The Eternal Return (Reccurance). (for those interested a free copy of this paper is available for download from the 'Contact' page of my website -
http://www.anthonypeake.com/
In June last year I met him in a wondeful monastery deep in the English countryside.The Forest Hermitage (วัดป่าสันติธรรม) is a branch of Wat Nong Pah Pong (วัดหนองป่าพง), the late Luang Por Chah's principal monastery in N. E. Thailand.
(website: http://www.foresthermitage.org.uk/).
Indeed that very day was, by tradition, both the Buddha's birthday and also the celebration of his day of enlightenment under the Bohdi Tree. This coincidence was not lost on me - my Daemon had ensured that my first ever visit to a Buddhist monastery was to be on such an auspicious and significant day.
I sat with Ekaggata Bikkhu in a tiny spartan hut in the grounds. He explained to me that in his opinion my writing was of profound importance and that I should focus all my attention on getting it better known. Indeed he amazed my by commenting that my theory was, in many ways, pure Buddhism. He added that he was delighted that somebody with absolutely no knowledge of Buddhist scripture could have come to such "enlightened" conclusions.
These revelations made me slightly scared and filled me with trepidation. This had never been my intention when I started out on my quest but there was, as far as Ekaggata was concerned, an underlying reason for my writing. I simply wanted to write a book for my own enjoyment. I never expected it to be published nor anybody else to be really interested in my ideas. But now, with book sales in excess of 30,000, and the events described in my last post, I just sit back and wonder what this is all really about.
Ekeggata and I are still in snail-mail contact and he continues to urge me to follow my 'inner guide'. He has sent me many books and articles and I am finding revelations, both external and internal, on a daily basis.
I find this all very strange and not a little awe-inspiring. Ekaggata is not alone in contacting me. Two years ago I was an arch rationalist and materialist and now as well as Buddhist monks, Sufi Shayaks, mediums,Gnostics,Hindu Mystics and even Occult adepts (for example The Servants of the Light - SOL) have contacted me - all of whom seem to see something of profound importance in me and my writings. Not the route I expected - but I guess this is something my Daemon has always known!
(The photo heading this post was taken on that day in Warwickshre. Ekaggata is the monk on the extreme right).
Posted by Anthony Peake at 09:31

You deserve the accolades my dear! While your Daemon may have acted as guide, you provided the style and wit that makes your writing so inviting! I'm happy to be a part of your world!

And that photograph is breathtaking!

I aplaud your willingness to be open to possibilities and not to cling to rigid ideas. As a Canadian and slightly removed I get this impression that the British are more frightened of the notion of god than liberated from it, and the Americans the reverse. Of course, this is a huge generalization which I hope you will forgive me. We are all facing huge mysteries and I think we are best to admit that. I personally admire people who are willing to admit that they don't have it all figured out.

I personally think that everyone should have a regular dose of Buddhism at least once a day.

That such a diverse group of believers sees a certain truth in your words is a credit to your work. I think in shows you have touched on the common thread that runs through most all belief systems. And though I don't necessarily agree with all of your theory, I feel your work is one of the most important of the new century. What you have done, more than just promote a theory, is force people to think. Due to its mind bending properties I have affectionately labeled your book as LSD for the New Age. I can't wait for the next one.

Hi, would I be right in assuming you to be the same RAC from Dean's Circle Blog?

If so then please contact me as you posted about my theory of consciousness and it would be interesting to talk to you.

ps, I agree with you, Tony's book and theories unite many disparate ideologies and philosophies in a way that few other pieces of work have done.

RAC: Welcome. Your comments and observations are much appreciated. I assume from your comments that you have read the book. I am pleased that you enjoyed it.

Should you wish to join in as a full member of our little group please let me know.

ROBIN: Glad you like the picture. I took about 6 or 7 that day and all of them came out really well. The sunshine, the flowers, the atmosphere and the people made it a very special day.